4 Ways to Sync Files for Remote Offices with Poor Connectivity

Why Cloud Storage is a ‘Must-Have’ for Creative Professionals

Many times remote offices have poor connectivity making it a nightmare to sync between locations. Currently, your business could either use a VPN to allow employees across offices to access files at one location or everything can be stored in the cloud, enabling employees to access files directly from the cloud.

With VPN, all files and critical hardware are in one location which allows the users to access files from one common file structure. However, file access can be slow due to the speed of the local network. Files have to come through the LAN at HQ and then to the user’s location. Users also become part of the HQ network rather than the local office network which impedes the functionality of other network resources such as printers. The worst part is that it’s extremely painful to keep logging into and out of VPN just to grab a file. Related post: How to Avoid the Pain of Syncing Files Over VPN.

NAS drives with sync software such as SugarSync and Rsync could be used, but you would then be replicating data across each office. Also, the requirement to maintain critical hardware at each location becomes a concern. For example, what happens if one of the drives at a remote location fails? How easy is it to get it up and running again? NAS Drives at each location, however, do provide fast access to files since they are located on your LAN and usually provide a mapped letter drive giving users easy access to the files.

Cloud storage is perfect for keeping things in sync across locations unless these locations have poor connectivity as working from the cloud can be a challenge due to speed and latency issues. Providers such as Box, Dropbox and OneDrive do allow a cache on each user’s computer, but this causes other problems such as not having enough room on your laptop to sync the entire file store.

With Morro Data’s CloudNAS you can have the best of both cloud storage and NAS drives. The CacheDrive acts like a local NAS to provide fast read/write access to desktop machines via a network drive at all offices. However, it’s actually just acting as a front to Cloud Storage. You no longer need to worry about poor connectivity as the CacheDrive takes care of getting the files to the cloud, optimizing for speed, and can handle a connection dropping, re-starting right where it left off without missing a beat.

Morro Data allows you to bring your own cloud storage provider including Amazon S3, or Azure Blob, Backblaze B2, and Wasabi making setup easy with multiple offices. Management of the CacheDrives is also quite simple since it can be maintained from one central location using the web-based Morro Control Manager. Cache & Sync is an affordable way to get your offices acting as if they are on the same LAN. 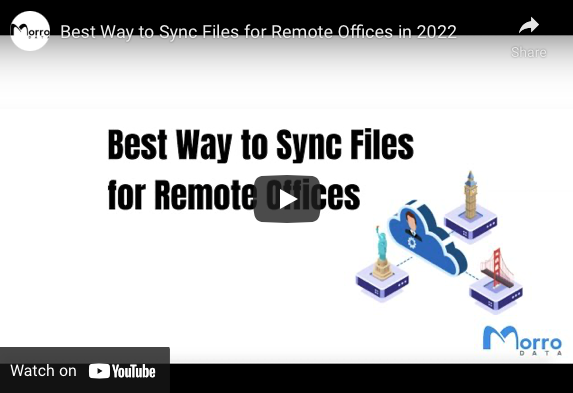